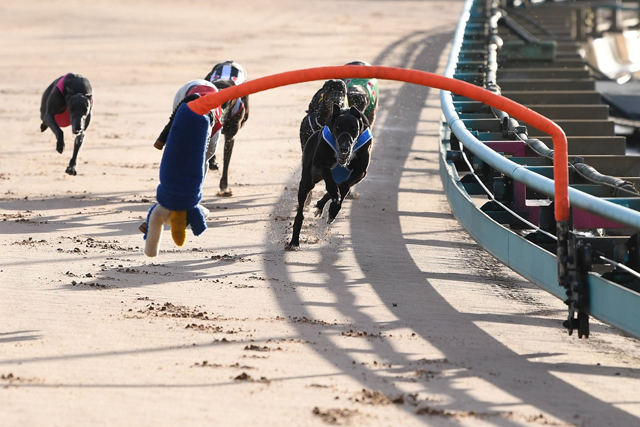 The extension of the trial of the FOL will also provide a larger variety in distances for trainers looking to utilise the FOL for their greyhounds.

Catchers are required over the 400m, 520m, and 596m in the interest of the health and safety of both greyhounds and participants.

Registered Catchers catching greyhounds on the FOL are reminded they are not permitted to enter the track surface when the lure is in motion and must adhere to the instruction from club staff.

When will the Finish on Lure be introduced on the Inside track?
The FOL trial will be extended to the Inside track from Tuesday 24 April, with nominations now open on fasttrack.grv.org.au.

What meetings will the Finish on Lure be run?
The FOL will operate on the Inside and Outside track during all scheduled meetings at Geelong which will incorporate Tier 3, Ranking, APM and Provincial Full Stakes meetings.

What is the future of the Finish on Lure in Victoria?

The FOL Working Group, which is made up of representatives of GRV Staff, Geelong Greyhound Racing Club (GGRC) and the Greyhound Owners, Trainers and Breeders Association (GOTBA) has and will continue to monitor the Key Performance Indicators (KPIs) which includes; nomination numbers, injuries, racing incidents and participant feedback. The GGRC have now requested to continue using the Finish on Lure.