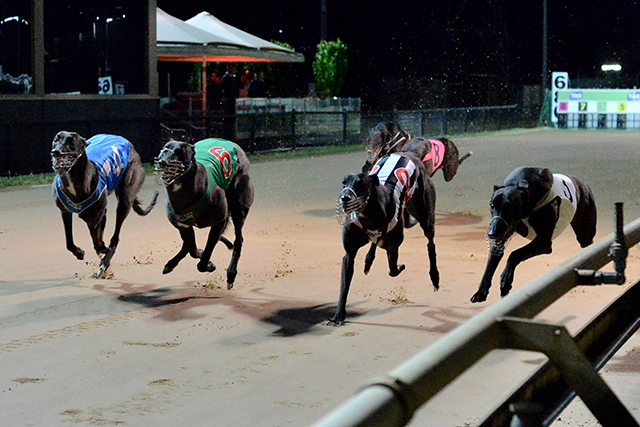 King aces punters but will he strike gold?


One of the greatest upsets in Geelong Gold Cup history took place on Friday night when Corleone King won a heat at odds of $55.00.

It was a rare sight as the four leading greyhounds charged to the finish line side by side in the second of seven heats, with a quarter of a length eventually separating the quartet.

“It was a really good call from race caller, Brendan Delaney. He got it right,” Corleone King’s trainer David Geall said.

The win was a pleasant surprise for the Lara-based Geall, and it was also a case of history repeating 15 years on, as he trained Maldon Magic to an upset victory in a Geelong Gold Cup heat in 2002 at odds of $36.20 before that greyhound ran fourth to the brilliant Allan Britton-trained Bear Creek in the final.

“I didn’t give Maldon Magic much chance of winning his heat because he was up against a very good greyhound called Exceptional, who looked unbeatable. In saying that, I didn’t give Corleone King a chance either as he was also up against some very good dogs as well on Friday night like Jesaulenko and Aston Dinnigan. You just don’t expect to beat greyhounds of that calibre,” he said.

“Unfortunately I didn’t back him (Corleone King), but my wife Rose had a small bet on him and so did the owners, who are from NSW and were watching the race together from the RSL in Young, so I’m delighted for them. They bred the dog as well.”

Geall said Corleone King would face a huge challenge again in the final, although the box draw will help his chances.

“Prior to the box draw I would have said he is a 50/1 chance to win the final, but as he is drawn in box one I reckon he’s about a 20/1 chance now. He is a very quick greyhound on his night and he loves box one, two and three. The only problem is that he only begins well about every six starts or so, and he began well in his heat, so the chances of him beginning like that that two weeks in a row are very slim.”

Geall said the greyhounds to beat in Friday night’s $67,000 final were Bewildering, who he describes as a ‘freak’, and classy Queenslander Thirty Talks.

Corelone King is one of four 2017 Geelong Gold Cup finalists trained locally, the others being Judicial Man (Brooke Ennis), Blue Gum Hill and Not Available (Robert Britton) who are all based in Lara. 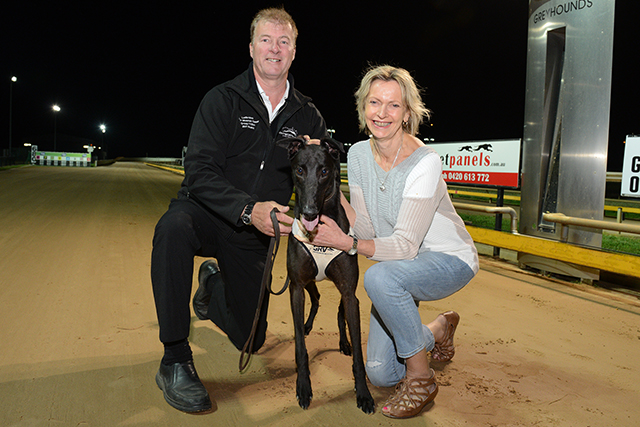 Corleone King with David and Rose Geall after his thrilling heat win. Photos by Clint Anderson.