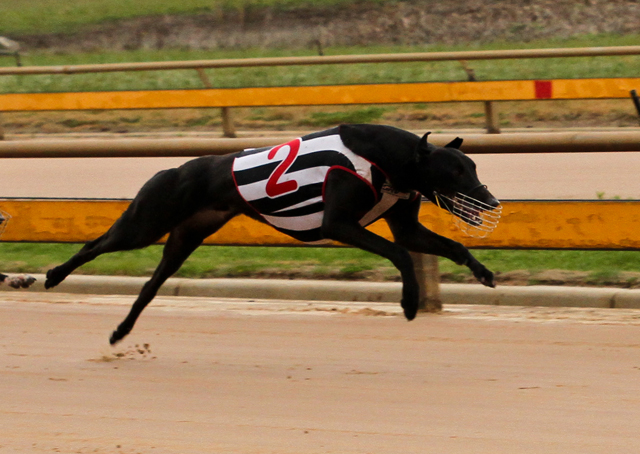 Harry serves up ‘whacker’ of a win

Although Bewley had a break from training greyhounds, he still kept an eye on a few dogs through the TAB while he lived the inner city life as a chef with his wife Debbie.

But chasing a change of scenery and a little bit more room to move, Bewley purchased a three-acre property in Pentland Hills with the dream of racing greyhounds again.

Tuesday night at Geelong, Chaddy Whacker, who is informally known as Harry, provided the thrill Bewley had been missing by breaking his maiden status from box two.

The son of Paddy Whacker and Daintree Sugar, was slow to begin but used the inside box draw to rail up and run down Derivation, stopping the clock at 26.531sec.

“It is still such a buzz to be back training and to record a win first up is even better,” Bewley said. 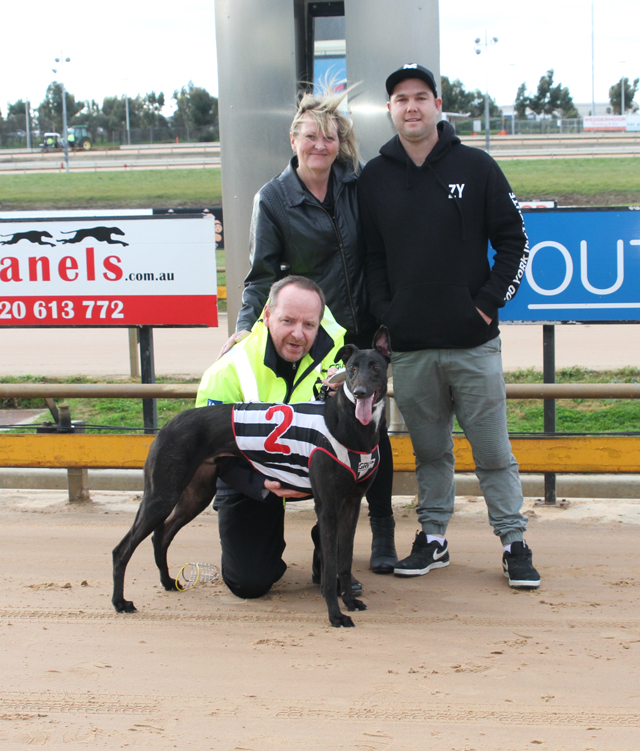 Thanks to a great support system made up of Bendigo Greyhound Racing Association Manager, Troy Harley, who reared Chaddy Whacker, Bobby Douglass and Paul Wheeler, Bewley felt he was well prepared to get back to what he has always loved doing – racing greyhounds.

Before Bewley’s break from training he had greyhounds that competed at group level, including Warragul and Shepparton Cup’s as well as a Warrnambool Classic.

With a kennel of five at their newly established property, Bewley relies on the help of his wife Debbie while he continues to work full time in the city.

“My wife is a huge help – it is a full on operation, even with five dogs. I am very lucky that she loves the dogs just as much as I do.”

Harry is kenneled along side his rearing partner Shaker Breaker, who is out of Spud Regis and Destiny Shaker.

“We originally purchased Shaker Breaker as a pup and needed a rearing partner so we bought Harry.”

“Shaker Breaker is about eight lengths quicker but she is pretty injury prone so she shouldn’t be too far off having her first start.”

Although Harry may be that little bit slower, Bewley said he is a pleasure to train.

“He is a happy-go-lucky dog and just tries his heart out and that is all you can ask for.”

Bewley’s interest doesn’t stop with racing, he is also a very keen breeder especially after purchasing a sister to the great Fernando Bale, Gazer Bale.

“Paul Wheeler helped me in choosing a sire for Gazer and we ended up with Barcia Bale because of how commercial he is as a stud dog,” Bewley said.

Gazer Bale raced on 54 occasions for seven wins and 14 minor placings which included three victories over the 600 metre distance at The Meadows, before making the move to South Australia.

Gazer Bale’s potential as a breeding female is exceptional considering she is out of an outstanding litter with each of her litter siblings recording victories on the race track. Being a sister to champion sprinter Fernando Bale is also an added bonus.

Still with a little while to wait until his Barcia Bale and Gazer Bale litter hits the track, Bewley will continue to build the confidence of his young greyhounds Chaddy Whacker and Shaker Breaker.