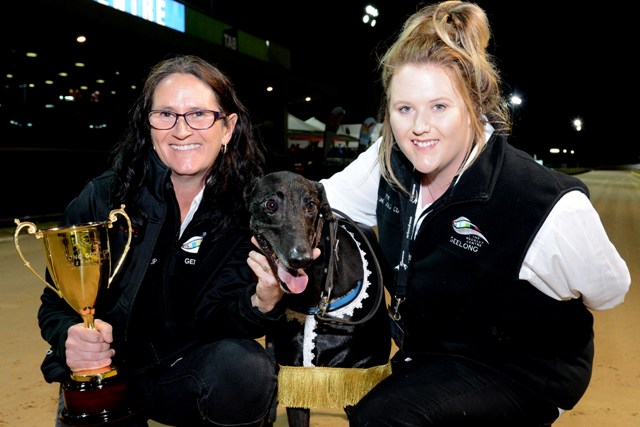 
Shima Song ($5.20) became the first local greyhound to win the Geelong Gold Cup (460m) since her famous sire Dyna Tron won the race in 2011, when scoring a sensational come from behind win tonight.

Trained by Andrea Dailly, who also trained Dyna Tron, Shima Song scored her first win at group level having made several feature finals, and she had to do it the hard way.

After Judicial Man skipped away to a clear six length lead, Shima Song pulled out all the stops to reel him in to score in 25.39sec.

Andrea’s husband Tom said after the race that he is hoping the win, which saw Shima Song claim a $47,000 first prize, is a sign of bigger things to come.

“Dyna Tron went on to win the Melbourne Cup, and I reckon Shima Song is a sneaky chance to do the same thing,” Tom Dailly said after the race.

“She didn’t begin as well as she can tonight, but she got the room she needed and she is as strong as a bull.”

Heats of the TAB Melbourne Cup, the richest greyhound race in the world boasting $600,000 in prize money, will be run in a fortnight from tonight over 515m at Sandown Park.

Shima Song was bred and is owned by the Davrob Syndicate, led by Sandown Greyhound Racing Club Director, David Gleeson.

The Geelong Gold Cup was used as a great community fundraiser which resulted in $1,000 being won by the Anakie Football and Netball Club, while the Geelong Pool Club won $500.

IMAGES: Below, Shima Song (4) runs down Judicial Man in the last stride, and top of page, with trainer Andrea Dailly and her daughter Korie Heinrich. 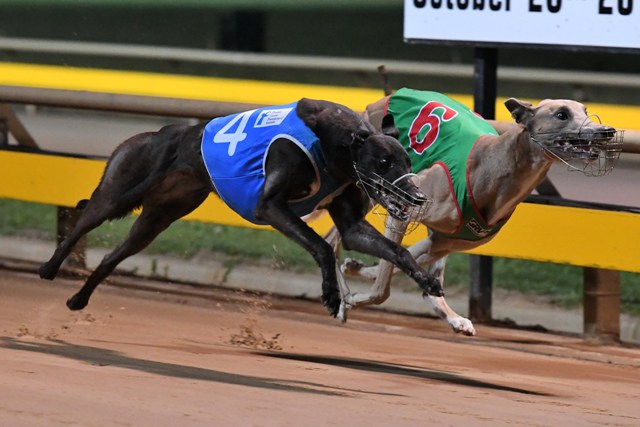