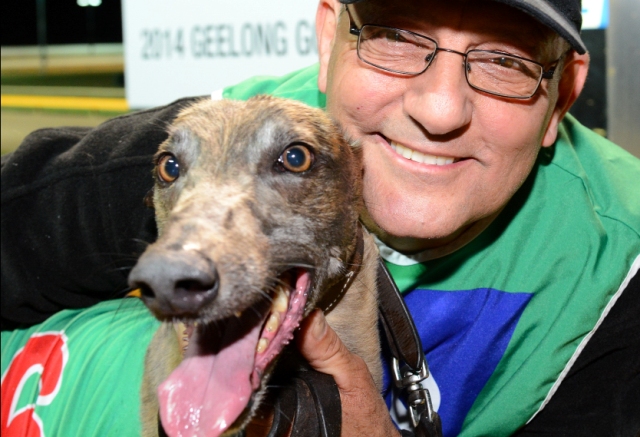 Can ‘Aka’ Get Up Against the Odds?

Virtually every big name trainer in Victoria lives in regional areas and, as such, most feature races are trained by people from the bush.

Akathiotis, of Reservoir, is one of a select few greyhound trainers that lives within 15 kilometres of Melbourne’s CBD.

He knows what it’s like to win a major race, having trained Master Giant to victory in the 1992 Melbourne Cup.. but that was a long time ago.

Akathiotis has been knocking on the door in recent times, too, having had a couple of greyhounds compete in group finals over the past 12 months.

However, it has been two decades since Akathiotis tasted success at group level, and his hopes this time around are pinned on Nockabout Aussie, who is drawn in Box 8.

Although he’s a mad railer, there’s a school of thought that Nockabout Aussie, is suited by his wide draw in this instance.

RSN racecaller James Van de Maat and Sky Racing’s Simone Fisher suggested in their Geelong Cup preview for GRVextra this week that Nockabout Aussie is the best place bet in the race, given his strength and price with TAB fixed odds.
It’s a theory Akathiotis also prescribes to.

“A lot of greyhounds run wide on the Geelong track, but Nockabout Aussie is one greyhound that won’t.”

“He really loves to rail, and he’ll go in a straight line at the start from Box 8. If he can avoid trouble he should go pretty close.”

“At $14.00, I have to agree with Simone and James saying he’s a good place bet, but in saying that I haven’t given up hope of him winning either.”

“I won’t be getting my hopes up though. I’ve been in this game too long to do that. But knowing Nockabout Aussie and the way he races, logic tells me he is a realistic chance,” he said.

With 66 starts to his name (for 15 wins and 19 placings), Nockabout Aussie is the most experienced greyhound in the race, and he was brilliant when coming from last to win his Geelong Cup heat in 25.557sec, less than a length and a half off the fastest heat winner Luca Neveelk.

“He deserves to win a big race, but they don’t come easily. He’s a strong and consistent greyhound, and I’ll be so happy if he wins.”

“Prior to this, the biggest race he has been in was the Victorian final of the National Sprint Championship at The Meadows in August when he had Box 8. He ran fifth that night to Crackerjack Dak, but he got within five lengths of him and was a bit unlucky.”

“Hopefully luck falls his way on Friday night,” he said.

Having bred, owned and trained Nockabout Aussie himself, it would be a fairytale win for Akathiotis.

As a trainer who has defied the odds by training in suburbia for such a long time, taking out the Geelong Cup would be a mighty achievement.